Having completed the Devonmama course by 34 weeks of an easy pregnancy I felt very positive in the final weeks prior to my daughter's birth. Experiencing this course with my husband was important to me so that we could both set our expectations for the birth together, and for me to know that my husband had all the tools to be a fab birth partner and advocate to make informed decisions for me if necessary.

What I took most from the course was the confidence that my body and my baby would know what to do when labour kicked in and that all I had to do was relax into it, which I felt I achieved even though I didn't have the birth I'd written into my ideal birth plan.

I went into the early stages of labour naturally at 39 weeks, just a few days after going on maternity leave from my office job. My body was preparing for labour the weekend my husband was away so I was willing it to all start properly when he came back, which thankfully it did! It was early on the Tuesday morning when I felt the surges start and we decided my husband would go to work and I'd call him home if necessary.

Rushing around trying to get things ready for baby's arrival meant that I hadn't really practiced the course as much as I'd have hoped but the way the MP3 tracks were presented meant that I easily felt calm and relaxed when I put them on during the course of that day. When my husband arrived home normal time from work we packed up the final things for the hospital but as soon as we were ready to leave the surges got less frequent, and it turned out that my early labour was set to last over 36 hours!

During that 36 hours my surges were pretty intense and coming no fewer than every 30 min. They kept ramping up to around every 5 min, only to then become slightly less frequent and not enough to be allowed to go to hospital. Nor did they tail off enough to enable me to rest or want to eat properly and I got quite exhausted, so we eventually made the decision with the triage midwives that I needed to come in and try to get the labour progressed.

Even though this part of my labour was quite drawn out I was able to keep fairly calm throughout and had been able to breathe through the surges, so I knew that it wasn't fear of the birth that was preventing labour progressing (I was later told it was the baby's poor position that caused it).

At hospital they let me use the pool for a bit to relax, gave me some oral painkillers and a sweep to get things progressed. I could have kissed the midwife who gave me the sweep as it soon led to my waters breaking and the active labour stage! My waters broke at around 11pm on the Wednesday and I had my daughter at 7.24am on the Thursday, so that part was a normal length thankfully. 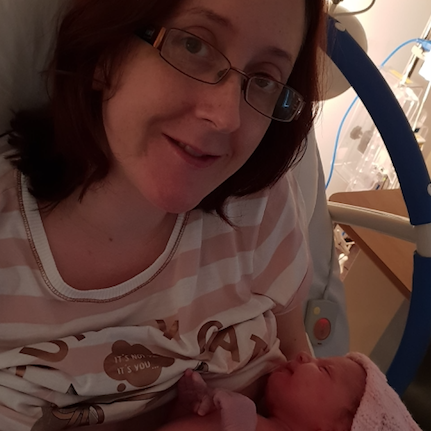 Unfortunately they discovered meconium in the waters meaning that I couldn't go back to the birthing pool as planned and had to go to labour ward. There was talk of the induction drip if I didn't progress quickly but I knew that all I needed was some rest to get myself to the pushing stage, so I decided to get a shot of pethadin for that reason alone, as I was dealing with the pain side of things fine with the breathing techniques. I had a lovely 4 hours where I was aware of having surges still but then promptly snoozing again straight away in between! Once the pethadin had worn off I was pretty much ready to deliver and so swapped onto gas and air and with a last bit of effort my daughter was born! My husband was amazed that I didn't make a sound throughout and there was minimal hand squeezing!

I wanted to have an unassisted third stage (of delivering the placenta) but it turned out I needn't have worried as it followed baby immediately out, which I later found out is quite unusual!

Despite needing some stitches I had a quick recovery and I believe this was also helped by the Wise Hippo programme. Hypnobirthing is something I definitely would reccomend to prospective parents as it was one of the things that gave me the grounding to being the best mum I can!