My labour was nothing but amazing. I never thought I'd use the word labour and amazing in the same sentence. 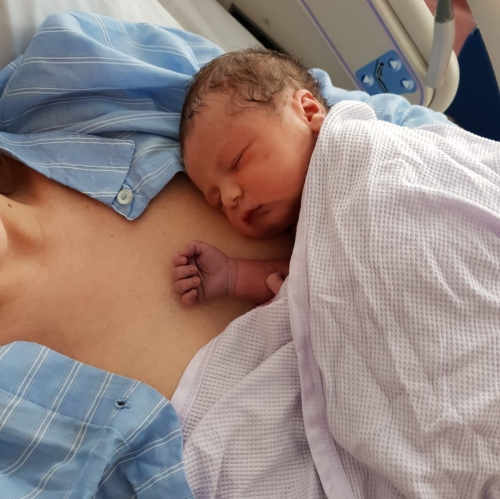 Due to my son not growing at the rate he needed to I was having regular growth scans. On Tuesday 6th February I went in to have my last growth scan to be told they wanted to induce me that afternoon, completely taken back by this I told the doctor No and that I needed to go home and think about it. After going home and discussing the options with my husband, we made the decision that we needed to do what was best for our boy and with that I booked in be induced the following day.

Going into hospital the next day I was scared and uncomfortable at the thought of having a sweep and being induced but using the breathing techniques I was soon back in my calm place and getting excited at knowing I would soon have my boy in my arms.

That day I kept as active as I could, regularly walking around the hospital despite being in constant pain. That evening I barely slept as the pain was all down my back, legs and bum but despite this I remained calm listening to the MP3 tracks. My head was where it needed to be and I knew I was getting that one step closer.

The following day the doctor removed the pessary and told me it hadn't worked and inserted another one. The pain got worse as the day went on and I was unable to walk or sit down for longer than 5 minutes but I still kept as active as I could.

At 10pm my husband was convinced I was having  surges but the midwife assured us it was just pessary pains and they would be breaking my waters the following morning, with that we tried to get our heads down.

12.30pm - I went to the toliet, with that my waters broke but I was told this didn't mean I was in labour and to get some rest.
A midwife soon came in to see how far dilated I was and was shocked to tell me I was 7cm and needed to go to the delivery suite.

Within the next hour I was moved upstairs and my Mum and midwife had arrived. My surges were getting stronger, I got into a high kneeling position up against the backrest of the bed, with the instrumental music playing in the background and my husband rubbing my back I began to breath through the surges while humming the baby down. My midwife told me he was only 1cm away and I needed to start pushing and without any thought I began to push, 20 minutes later Byron was born at 2.55am.

I had skin to skin for nearly an hour while I let the cord finish pulsating. Byron was incredibly calm and didn't cry or scream at all, not like the labours you see on one born every minute.
My midwife congratulated me and told me I did an amazing job and remained calm and in control throughout, she also commented on the music and said how beautiful it was. My Mum couldn't believe I had no pain relief and was blown away by the effect hypnobirthing had had.

Before hypnobirthing I was petrified of giving birth to the point it was one of my reasons for not wanting children but after my labour I can positively say I'd do it all again tomorrow and it was an amazing beautiful experience.