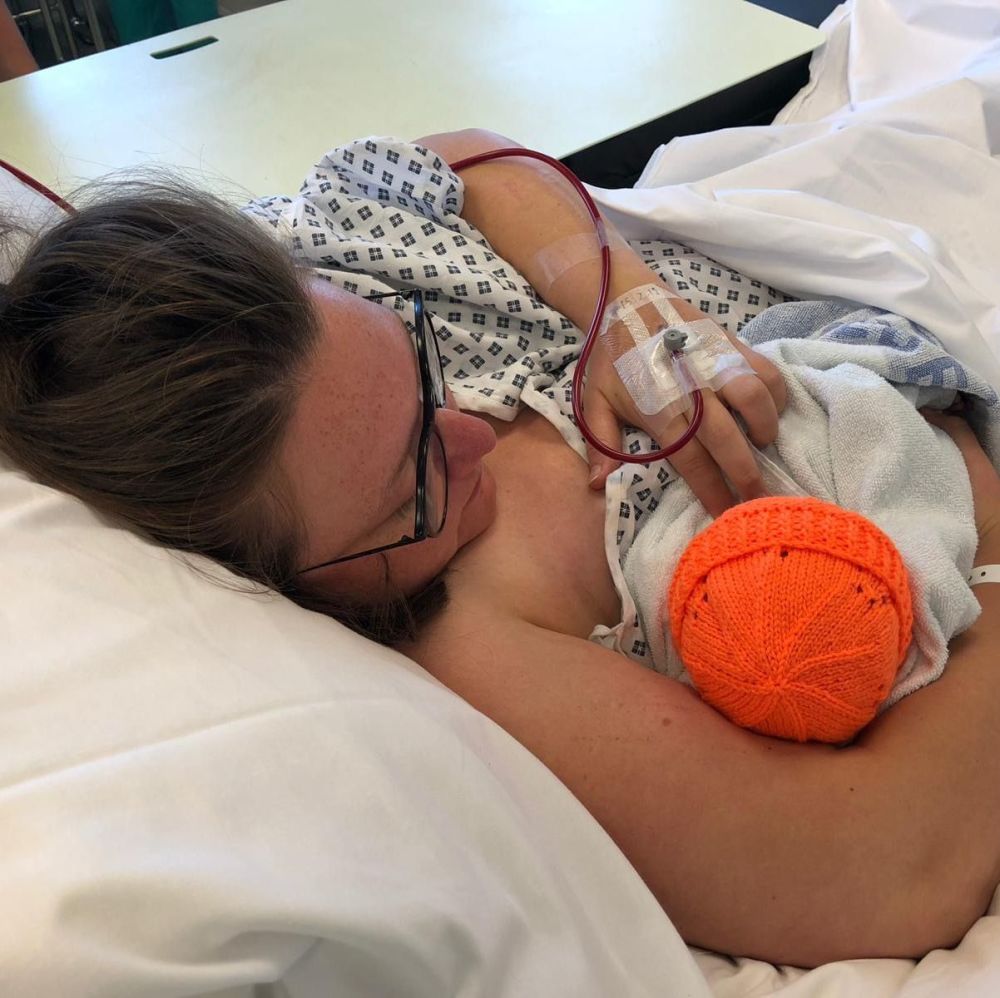 I turned 38 weeks on Saturday July 13th 2019, which also happened to be the weekend my husband & I had booked for our final weekend away as a couple - we were heading to a spa in Falmouth!

We arrived, dropped our bags, walked into town, had lunch, walked back to the hotel, got changed, went to the spa, I had a swim, got out of the pool… and my waters broke. In the spa. I had always wondered whether I’d know it was my waters for sure or whether I would think I’d wet myself, but trust me - you’ll know. I waddled back to our lounger by the pool & desperately tried to get the attention of my husband; the hot tub bubbles in his ears drowning out my calls. We both agreed this was my waters and headed back to the room (handing back our towels at the spa reception and trying to explain that they may just want to burn one of them).

I was now looking forward to meeting our baby as I assumed labour would begin shortly after. We got back in the car (nothing like driving 2.5 hours there to spend 3 hours, then to drive 2.5 hours home again), rang the delivery suite who advised us to wait for my labour to begin at home & they’d see me soon and settled into what could be a tricky, surge-filled car journey. Unfortunately, nothing happened. When we arrived home it was late in the evening so I spent some time bouncing on the birthing ball, listening to birthing tracks & relaxing - trying to encourage that oxytocin to flow! I went to bed expecting to be woken at some point with my first tightenings, but again this didn’t happen.

24 hours later I attended the birthing suite to be assessed & they confirmed using the ‘amni-pad’ that this was my waters & I should head to the John MacPherson ward in Torbay. I was given my own room where I continued to relax & focus on positive labour thoughts! I had to be monitored regularly due to the infection risk - around 36 hours after my waters broke I was given a pessary to try, I was reluctant to be induced (seeing my water birth in Newton Abbot Hospital birth centre slowly disappear), but having been in a swimming pool just before my waters broke, the hospital were keen to get labour started! Fast forward through 24 hours of walking laps of the hospital grounds in the sun, being monitored, snacking & the Wimbledon Mens Singles Final… Still no signs of early labour.

At this point the midwives were keen to get me onto the Syntocinon Drip which wasn’t my ideal scenario, but I still felt calm, I trusted everyone around me & I was now feeling very ready to meet Baby Blackmore.

I was taken down to the delivery suite & our midwife helped to set up the room as I had asked in my birth plan - main lights were turned off, the dull lamp was on and pointed into the corner, my diffuser with my chosen oil was on & I was listening to my calm birth playlist or audio books. The first drip was put in & the early stages of labour began within the first hour, due to my induction, baby and I had to be monitored at every moment which restricted me slightly, although didn’t worry me too much as the bed was able to be in a sit position. Through the next 4 hours I was able to remain in a trance like state, listening to my music & dozing in and out of sleep - breathing deeply throughout every surge (although these were still small). After 4 hours, the midwife came into the room with a doctor & explained they had been watching from the desk & had been noticing baby’s heart rate dropping during each of my surges but that as it had been raising again immediately they weren’t too concerned but would want to restart the drip at the lowest level & raise it again more slowly. At this point they asked to examine me, I agreed & they found I was 0 cm - a little disheartening, but I wasn’t too worried at this point!

The drip began again and after another 4 hours of breathing, focus, audio books & monitoring the same thing happened. This time it was a different doctor who calmly explained that I had two choices: 1 - start the Syntocinon drip again one more time and see if an even slower rise in amount would help to keep baby & I calm & safe, or 2 - have a cesarean. The doctor was incredible and actually held my hand while explaining my choices, answering every question & using hushed tones. Now, this was a tricky moment for me, having been in a totally tranquil, relaxed state I was now having to make a big, very medical decision. This was the point when I could have easily lost my head with my labour, but I have the most supportive husband who was an incredible birth partner and led our discussion, asking questions without me having to prompt him & helped to lead me to my choice of giving the drip one more try. He quite rightly said that I would have always wondered, ‘what if’ if i didn’t give it another go & that they wouldn’t be offering it if they weren’t absolutely sure it was safe for both me and baby.

Again, after a further 4 hours of managing surges and dwelling in my calm state, the midwife came in with the surgeon again and told me that the same thing had happened but that this time baby’s heart rate wasn’t picking up as quickly as they’d like so that I’d have to have an emergency cesarean. By this point, I had laboured for 12 hours and still felt incredibly calm & in control. They prepped me for surgery and wheeled me in - I was in such a calm head space that I was chatting to the surgeon & the anaesthetists, asking them all what they thought I was going to have (although I was utterly convinced baby was a girl). The room was calm & the vibe was so positive. They asked me how they could facilitate a happy environment for me, so they turned the overhead light away from my eyes, turned the radio up (their aux lead had broken that morning, so I couldn’t have my own music) & dropped the drape at the earliest moment.

I watched my baby be born on July 16th 2019 - my little (6lbs 10oz) baby boy! No-one was as surprised as me to see that baby B was a boy! He was also born with an extra long umbilical cord that was more than double the usual length & was wrapped around his legs, chest & neck - this was the cause of his heart rate dropping, he was literally being squeezed like a boa constrictor on each surge. After he had been born, they passed him to me for skin-to-skin, Rory (my husband) sobbed for the remainder of our time in theatre & burst again every time he held him for a long while after. My anaesthetist told me that Bill had been born to Lewis Capaldi - Hold Me While You Wait. It was the best moment of my life.

While I was being sorted after the cesarean, my body went into shock & I started being sick. An odd sensation when you’re numb from the nipples down! But I was in safe hands and baby Bill was here safe, he was passed to Daddy which was lovely for me to see & we took my mind away from the shock by choosing his name! 45 minutes later, we were back in our sun soaked room on the delivery suite, I was feeding Bill for the first time & 9 months later I haven’t looked back - other than growing & birthing him, breastfeeding Bill has been my biggest achievement in life.

My birth wasn't at all how I'd imagined, yet I've still never felt so powerful or in control of my mind and body - I can't wait for next time.