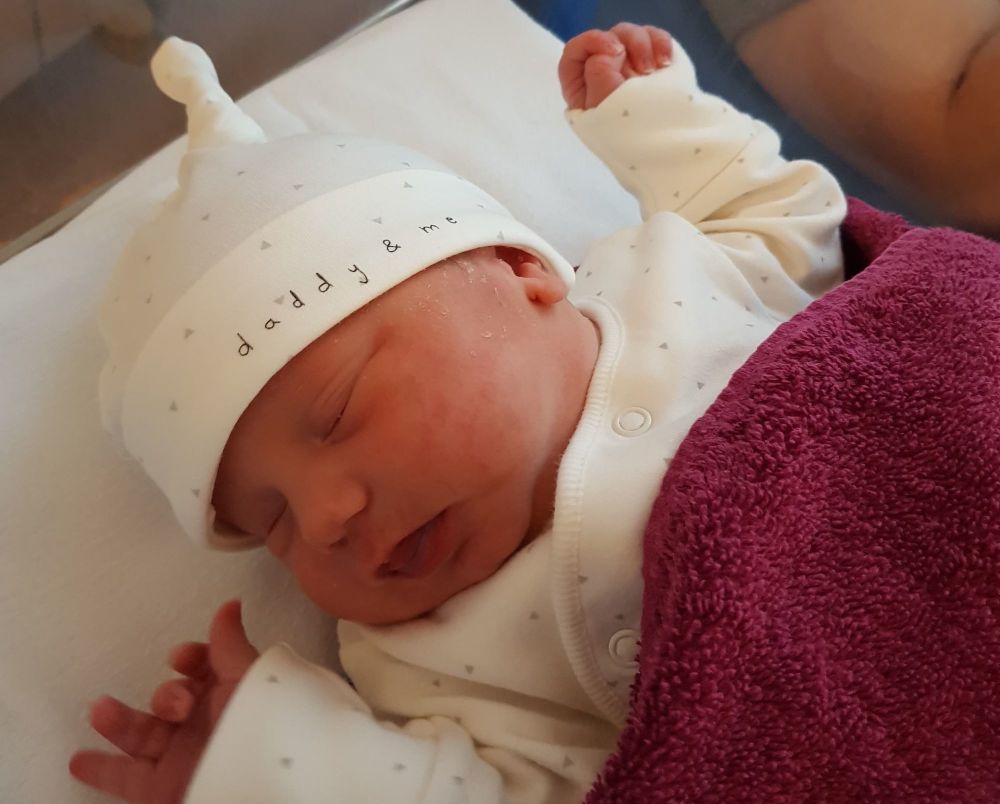 So my first birth was what many people would describe as a perfect birth. I had a water birth at the hospital and used gas and air for pain relief. However I was absolutely terrified throughout the whole experience as I hadn't done any research/learnt any breathing techniques/ done any hypnobirthing. I didn't know what I was doing and I didn't trust my instincts or my body and I came out of a relatively positive birth feeling traumatised.

Now my second birth was definitely not perfect! But it was a million times more positive and that's all thanks to hypnobirthing. Around 5 days before my due date I got my bloody show. I was shocked because my daughter had been induced for being "late" at 41+5 and was born at 41+6 so I was expecting to go over again. The show threw me off a little and i kept expecting something to happen... but it didn't! I got a little negative and realised I was putting too much pressure on myself so on my due date I decided I would pretend I wasn't pregnant any more. We had a lovely day with our toddler and went to the park and I completely relaxed that evening telling my partner to have a drink and I had some nosecco whilst watching BGT the champions.

Around 10 o'clock I got my first surge. I'd been having Braxton hicks that felt similar to this for days though so I didn't think too much of it. Around 8 minutes later I had another one and then another so I told my partner to make coffee. I bounced on my ball and breathed through the surges with ease. They were coming around 5 mins apart but one would be super intense and then the next one would be much less intense. I decided to have a bath and see what happened. I was in the bath for around half an hour when the surges were now around 4 mins apart but still with one being intense and the next not so much. I decided to phone in as with my daughter I had a quick labour and they had told me to phone in quite early on. I spoke to a lovely midwife and asked if I could go in just to see what was happening as i felt this would help me to stay relaxed.

We arrived at the hospital just after midnight and it was really busy. I asked if the pool was available and was horrified to discover it was not!!! My back up plan of going to the mlu for a water birth was also not an option as all the midwives were taken up at the hospital. I asked if I could be examined to find out what was going on as my surges were getting closer together and the pain in my back felt constant but still some surges were more intense than others. When the midwife told me I was only 2cm and my cervix was still far back I had a major wobble with the entire plan feeling like it had flown out the window. I told my mum and Ryan I couldn't do it without the pool and I needed pethidine. They were both amazing at bringing me back to reality and reassuring me using the positive affirmations and helping me with the breathing. The midwife asked what I would like to do and i asked if i could have a bath at the hospital and see how things went. Then came the next dilemma... the delivery suite had no hot water!! The midwife said I could go to the post partum ward so off we went down to have a bath. In the bath I managed to breathe through my contractions but I was still really struggling with the constant pain in my back which was beginning to make it feel like I wasn't getting any break between surges.

After half an hour or so in the bath I decided to get out as Ryan doing the light touch massage on my back was a good distraction and was really helping with the back pain but was difficult for him with me in the bath as I was so low down. Trying to walk back up to delivery suite was really difficult because of the pain in my back and so they gave us a wheelchair and Ryan pushed me back up. I had UFO in my head and trying to keep active but the back pain was making it impossible and actually the place I felt comfiest was in the wheelchair. When we got back to delivery I continued to labour in the chair for a while and asked my mum to go and ask if I could have some pain relief. My midwife was on a break and so another midwife came in but then disappeared again! I continued to breathe through the surges in the wheelchair with Ryan using the massage on my back and positive affirmations constantly flowing through my head. I kept telling myself that the calmer I stayed the sooner my baby would be here and this was actually my favourite part of my labour. I felt calm and in the zone and the affirmations were amazing when having a surge.

When my midwife came back at around 2:30am she asked me what I would like to do and I knew I wanted to be examined to find out what was happening so I could make a decision about pain relief. If I hadn't progressed much I knew I would need some pain relief as I was feeling really tired and I knew I would need energy for what was to come. When she examined me I thought she said you haven't progressed much but luckily I misheard her and she said I had!

In around 2 hours I had progressed to 6-7cm. The midwife told me if I wanted pethidine it had to be now as if I carried on progressing quickly it can make the baby drowsy on delivery but the positive boost of having achieved good progression gave me the boost I needed and I asked for some gas and air instead. On my next surge I had one puff of the gas and air but realised it was more of a hindrance than a help as it got in the way of my breathing. I also started getting this urge to push that I could not breathe through. The midwife was telling me not to push and I was trying my hardest not to and breathing through instead and the gas and air was making this harder so after another puff on the next surge I realised I didn't want the gas and air so threw it at my poor mum!
I got a bit panicky here as the urge to push with the midwife telling me not to I found really stressful but my mum used the affirmations and the midwife telling me she didn't think it would be long till I was meeting my baby really helped. Looking back now I realise this is where I should have moved to my 2nd type of breathing but in the moment I carried on breathing through the surges as I had been without realising it was time to change! My mum and Ryan were amazing at keeping me calm throughout the next part and kept reminding me of my relaxing place and imagining myself there with a newborn baby helped me to feel positive.
Gradually as the surges got stronger and the intense feeling of my body pushing my baby down got stronger I couldn't resist the urge to push anymore and now the midwife told me to go with it asking my birthing partner to press the button so a second midwife would come in. The pressure was really intense particularly in my back passage which was really tough and I asked if we could stop and get the baby out a different way but my birthing partners and the midwives all talked me round and helped me through. The midwives took the baby's heart rate and realised it was dipping and told me I had to get the baby out now so with one final intense surge I pushed with everything my body had and my baby came out in one go with his head facing up!! The midwives were both shocked to discover that baby had been back to back all along and that is why i had been having so much pain in my back!
My partner told me that baby was a BOY and we had amazing skin to skin straight away with delayed chord clamping. He latched on after a few minutes and I tried to birth the placenta naturally. Unfortunately after 50 minutes there was still no sign of it and I was ready to just get everything over with so I had the injection. Unfortunately when the midwife examined me it became clear I had suffered a tear (probably from the extreme exit in one surge) but it was unclear how bad it was so she had to get the doctor in to look! At this point I burst into tears because I had just birthed my baby completely naturally and they were now telling me I might have to go to surgery and have an epidural to get stitched up! Luckily this wasn't the case and I got stitched in the room. As I had such a simple birth I was allowed to go home a few hours later and take my gorgeous boy to meet his sister